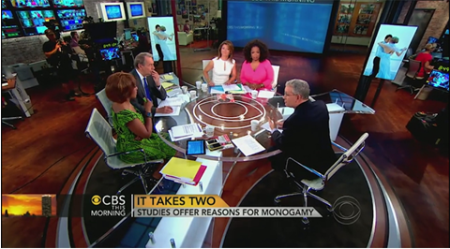 Referrals for sex therapy often include some mention that the individual has some kind of “performance anxiety.”   The problem isn’t always anxiety.  In fact, any negative emotion can cause sexual trouble.  It can just as easily be guilt or shame or sadness.  But anxiety is right up there as one of the commonest.

Some people seem to have sexual anxiety because they’re extremely shy — what we psychiatrists call “social anxiety.”  At the core of social anxiety is a dread of being the center of attention.

Sounds odd, right?  Attention is something most of us enjoy.  But it can also make us nervous.

Last summer I was asked to field some questions about sex on CBS This Morning.  It was my first time on national TV, and  I was deeply worried that 3 million people were going to see me make a total fool of myself.   As I waited in the Green Room, my heart pounding, I suddenly thought, “This is what it’s like for my patients with social anxiety — on a third date.”

In her new book An Intimate Life (which we’ve been discussing at some length on these pages and on PsychologyToday), sex surrogate Cheryl Cohen Greene (the one portrayed by Helen Hunt in The Sessions) describes her treatment of Larry, a 70 year old virgin who has been terrified of sex his whole life.

When Larry was in his thirties, he finally got up the courage to court a woman.  Sitting on her bed and kissing her on the lips after a romantic night out, he recalls “I felt like I was being speared through my chest and I could feel my stomach convulsing.”   He ran out of her apartment and never got physically close to a partner again until coming to see Cohen Green at 70.

Chapter 7 of An Intimate Life describes how a sex surrogate works with such an individual in treatment.  (Yes, I know the verb “work” seems odd in this context, but we’ll leave that for now.)

Like all behavioral treatments, this one involves learning to relax, doing easier things first (just lying down together for the first time makes Larry break out in a sweat), then progressing to more difficult things such as intercourse.  (I don’t think science has yet answered the question of why intercourse is especially anxiety-provoking for people, but that’s often the case).

A few years ago when I started to screen new sex therapy patients for social anxiety on a routine basis, I was startled by how many had it.  Like most anxiety problems, social anxiety is a quiet thing.  People don’t shout it from the rooftops.  But it’s readily identifiable once you know what questions to ask, and it’s almost always treatable.

When writer John Fortenbury interviewed me for his article, “On ‘Late’-in-Life Virginity Loss”for The Atlantic, I told him about the high prevalence of social anxiety in men presenting with sexual anxiety in my office.  I told him that some of the dating difficulty for individuals with social anxiety comes from the fact that as humans we tend to fall in love and mate with people we don’t know very well yet — that is to say, with relative strangers.  Not many of us fall in love with our longtime acquaintances. That makes things especially difficult for people with social anxiety, for whom opening up to strangers can be a big challenge.

Sometimes behavioral treatment helps.  But the effects can take awhile, and not everyone has the patience for it.  Sometimes medications such as serotonin reuptake inhibitors (SRI’s) can be useful.  But it’s an art to find one that doesn’t itself interfere with sexual function.  It can take time to find the right combination of treatments for a particular individual.   But it’s usually well worth the time and effort.  The results can be spectacular.